It is with deep sadness and a heavy heart that the Western Wisconsin AFL-CIO joins newly-elected WI AFL-CIO President Stephanie Bloomingdale in informing readers of the passing of Phil Neuenfeldt, President Emeritus of the Wisconsin AFL-CIO, who died in his home yesterday (Sunday). Phil was one of the truly great leaders of our labor movement.

He embodied the vision and values of organized labor. He firmly believed in the unity of trade unionism and in the power of collective bargaining to better peoples’ lives, build our middle class, and advance our nation.

Phil began his career as a Machinist, rose to leadership roles in his local union, then became Secretary-Treasurer of the Wisconsin AFL-CIO, and finally served as President for eight years.

As we take time to mourn, he would certainly want and expect us to carry on the fight to which he dedicated his life. I was with his family yesterday. Details about the formal celebrations of his life will be forthcoming.

In the meantime, each of us can best honor his memory by picking up the torch he carried so proudly.

This includes doing our part in the final hours before this critical election to bring about economic justice for working people in Wisconsin.

Phil would no doubt agree with Mother Jones, who advised, “Pray for the dead and fight like hell for the living.”

Rest in Peace, Phil. We will carry your torch forward. 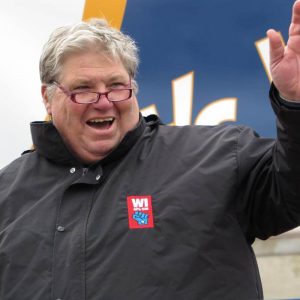