Why is Labor Day a holiday and what are we celebrating? The U.S. Department of Labor writes that Labor Day is “… is an annual celebration of the social and economic achievements of American workers.” In between the grilling and the visiting of family and friends this Labor Day, we invite you to take a few moments to ‘raise a glass’ for those who sacrificed so much for the workplace rules and protections that we often take for granted today. And it’s a suitable time to look at situations in today’s workplace that still need addressing.

There are hundreds of examples of sacrifices made by average Americans, including the Triangle Shirtwaist Fire, the Atlanta’s Washerwomen Strike, the Memphis Sanitation Workers Strike of 1968 (Martin Luther King was assassinated while there in support of the striking workers), and countless other events where working Americans have given life and limb for the protections we take for granted today. We invite area residents to learn more about these events because those who fail to learn history are doomed to repeat it.

American workers are again coming together to make their workplaces safer, fairer, and their voices stronger. In the first half 2022, the National Labor Relations Board (NLRB) recorded a 69 percent jump in the number of petitions filed by workers to exercise their freedom 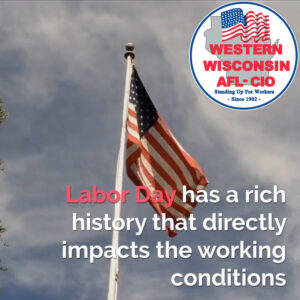 to come together and negotiate for fair compensation and a safer workplace. According to a recent Gallop Poll 71 percent of Americans currently support worker unions, the highest percentage recorded since 1964.

Wages are stagnant for many occupations. CEOs are earning 299 times the average worker. Many labor laws protecting workers have been diminished by years of leadership unfavorable to the average worker and by the cutting the budgets of government agencies that enforce safety laws and regulations. It’s been easier for a corporation to stop a union than it is for a worker to form one for decades, but we’re fighting back. Workers are fighting for equal pay, preservation of overtime laws, enhanced workplace safety, and equitable workplaces. America’s labor movement is building on the foundation of the movement’s history to take on issues like fairness, social and economic justice, and income inequality. We invite all workers, unionized or not, to join this fight. By coming together the average worker will prevail.