Which is sweeter: to have stayed up late and gone to bed knowing that anti-worker Wisconsin Gov. Scott Walker finally lost, or to have it as a wonderful surprise to wake up to? Since no one person can have both experiences, we’ll never really know, but both are beautiful, beautiful things.

Walker gained national notoriety in 2011 with an attack on public workers and their unions, an attack that mobilized the left into a massive resistance but not one that could overcome the Republican grip on Wisconsin’s government. Walker’s attacks had consequences: six years down the road Wisconsin teachers are paid less and are less experienced than before his reign. Following that, Walker faced a recall vote, which he survived, and was re-elected in another targeted race in 2014.

The damage wasn’t only to workers and education. Walker also “moved to reduce the role of science in environmental policymaking” and “presided over a series of controversial rollbacks in environmental protection, including relaxing laws governing iron mining and building on wetlands, in both cases to help specific companies avoid regulatory roadblocks.” But his big promises and poor results in the high-profile deal for a Foxconn factory in the state may have done him the most damage.

Walker launched a Republican presidential campaign in 2015 and seemed—in theory, at least—like he should be a major threat. However, that threat fizzled in a pathetic campaign. It was fun watching him slink back to Wisconsin … but nowhere near as fun as it is watching him lose.

Walker will be replaced by Tony Evers, the state’s education superintendent and a Daily Kos endorsee.

No doubt there were Democratic losses that hurt a lot on November 6, but this is worth a lot. 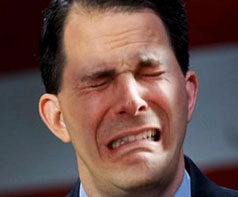