I know how much you all enjoyed interacting with Rich Trumka. He did the Monitor breakfast 12 times, and enjoyed sparring with you each and every year. We miss him dearly.

I am humbled and honored to be the president of the AFL-CIO.

We are the largest organization of working women in the country. Other than the U.S. military, we run the largest job training network in America. And we are leading long-overdue structural transformation.

I believe in my bones that the labor movement is the single most powerful force for progress. 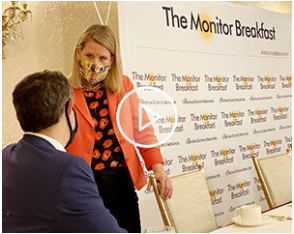 And I’m not talking about institutions. I’m talking about workers coming together to make change in our workplaces and our society. That’s what we do.

Through the worst public health crisis in a century, the worst economy since the Great Depression, working people stepped up.

We carried communities through the pandemic. We’re responding to Ida. We’re helping evacuation efforts in Afghanistan.

We were, are, and always will be essential.

This is a moment of tremendous opportunity. From tech to transportation, working people are speaking up and taking risks to create real change.

Public approval of unions is at a nearly 50-year high—65 percent and rising, including 71 percent of young people—as more Americans see unions as the solution to our broken economic rules.

And because of the labor movement’s efforts, we have the most pro-worker administration in history and a working majority in Congress.

We must meet this moment by building a modern labor movement.

A movement that is open and accessible and diverse.

A movement that keeps pace with a changing economy—the “She-session” and Great Resignation.

A movement in every sector and every community, with women and people of color at the center, where every worker has the right to a good, sustainable, union job.

All of that depends on putting working people where we belong: at the center of policy and the national conversation.

We are the counterforce to skyrocketing inequality. We balance the economy.

Working people want to join us—60 million workers would form a union today, according to MIT, including half of the tech workforce.

So if 60 million workers want in, why isn’t the labor movement growing? Because the rules are broken. Today in America, it’s easier for a corporation to stop a union than it is for a worker to form one.

That’s why we need the Richard Trumka PRO Act and the public sector PRO Act right alongside it.

The PRO Act is the centerpiece of our Workers First Agenda. These are the policies we voted for in the 2020 election.

We’re putting the full might of our movement into voting rights, the John Lewis Voting Rights Act and the For the People Act.

It also includes a long overdue path to citizenship for immigrant workers.

And a major provision of the PRO Act: real penalties against employers who interfere with our right to form a union.

These would all represent major progress. And progress is what I am focused on as AFL-CIO president.

To meet this moment, we’re going to be bold and inclusive.

Every working person in every kind of job can have a place in our movement.

Our doors are wide open—we invite people to join us as we take on issues like fairness, racial justice and gender equity—all part of a modern labor movement.

And we are going to innovate because just focusing on protecting what we have is far more dangerous than taking risks.

For example, technology is especially changing how we work. We don’t want it to replace or exploit us. We want technology to complement and support the human beings on the job.

That’s why I was proud to work with unions in every sector to launch the AFL-CIO Technology Institute in partnership with MIT, Stanford, and Carnegie Mellon. It’s a center of gravity for co-creating, incubating new ideas and innovating growth.

I also had the privilege to launch Next Up, a program focused on bringing more young workers into our movement, a goal that will guide my presidency every single day.

A modern labor movement can build an America where every working person has access to the life-changing power of a good, sustainable, union job.

No exceptions. No one left behind.

That’s my number one priority. That’s my vision. That’s my promise to America’s workers.