The Western Wisconsin AFL-CIO is proud to again be a full partner in the Coulee Region’s annual “Stamp-Out-Hunger” food drive on May 11th.

On May 11, as they deliver mail, members of NALC Branch 59 (Coulee Region letter carriers) will collect the donations that residents have left near their mail boxes. People are encouraged to leave a sturdy bag or container with non-perishable foods, such as canned soup, canned vegetables, canned meats and fish, pasta, rice or cereal next to their mailbox before the regular mail delivery on Saturday.

The timing is important, with food banks, pantries and shelters running low on donations from the winter holidays and with summer approaching, when many school meal programs are suspended.

A total of 75.3 million pounds of food was collected nationally in 2017, the third-highest amount since the food drive began in 1993. That brought the total over the past quarter-century to 1.6 billion pounds.

It is the nation’s largest single-day food drive and is held annually on the second Saturday in May in 10,000 cities and towns in all 50 states, the District of Columbia, Puerto Rico, the Virgin Islands and Guam.

With the extreme and unpredictable weather experienced this winter, along with the economic struggles many face, the Letter Carriers’ Food Drive is as important as ever. In La Crosse, one in three residents who use a food pantry is a child, compared with one in five nationally.

“There is a critical need to support local food banks, especially now during these times of continued cuts to programs that assist the poor. The Stamp Out Hunger food drive is one of the easiest ways for residents to help those in need. Placing just one bag of food by your mailbox will really help. We appreciate the support of the Coulee Region and the work of the National Association of Letter Carriers (NALC),” said Tyler Tubbs, President of the Western Wisconsin AFL-CIO.

President Tubbs went on to add, “It’s truly an honor and part of our (WWAFLCIO’s) mission …. one of the ways we give back to the communities in which we work and live.”

On May 11th volunteers from local unions will play a pivotal role by helping to unload incoming trucks with donations and the sorting of donated food. Local unions with volunteers participating this Saturday include; BLET 13, AFSCME 2748, AFSCME Retirees, IBEW 14, IAMAW 21, IAMAW DL 66, AFT 4999 and of course, NALC Branch 59.

Nationally, the Letter Carriers’ Stamp Out Hunger Food Drive is the outgrowth of the National Association of Letter Carriers’ tradition of community service, a tradition exhibited repeatedly by members of the letter carriers’ union over the years. These carriers, who go into neighborhoods in every town at least six days a week, have always been involved when something needed to be done, whether it be collecting funds for a charity like the Muscular Dystrophy Association, watching over the elderly through the Carrier Alert program, assisting the American Red Cross during time of disaster, or rescuing victims of fires, crime, and other mishaps.

For many years, a number of NALC’s branches (locals) had collected food for the needy as part of their community service efforts.

A national, coordinated effort by the NALC to help fight hunger in America grew out of discussions in 1991 by a number of leaders at the time, including NALC President Vincent R. Sombrotto, AFL-CIO Community Services Director Joseph Velasquez and Postmaster General Anthony Frank. A pilot drive was held in 10 cities in October of 1991, and it proved so successful that work began immediately on making it a nationwide effort.

Input from food banks and pantries suggested that late spring would be the best time since by then most food banks in the country start running out of donations received during the Thanksgiving and Christmas holiday periods.
A revamped drive was organized for May 15, 1993 — the second Saturday in May — with a goal of having at least one NALC branch in each of the 50 states participating. The result was astounding: More than 220 union branches collected more than 11 million pounds of food—a one-day record in the United States.

From Alaska to Florida, from Maine to Hawaii, letter carriers did double duty on Food Drive Day—delivering mail and picking up donations. The Food Drive just grew and grew from that point.

In 2010, the food drive surpassed the 1 billion pound park in total food collected over its history. 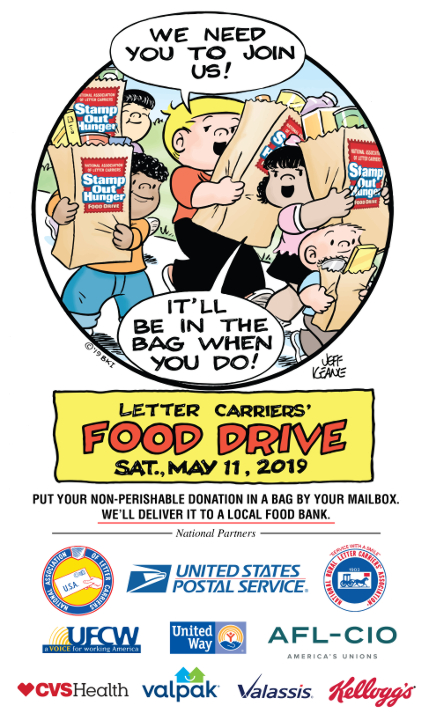