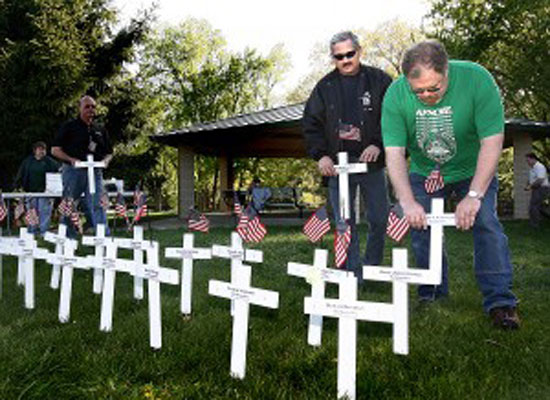 Local Working People in La Crosse Honored Those Injured or Killed on the Job and Call for Change.

(April 28, 2013, La Crosse, Wisconsin) — Local factory workers, firefighters, nurses, public sector employees, and community members were joined by a speakers group composed of six local, state, and federal elected officials to mourn for those who were injured or killed on the job in the past year and to commit to escalating the fight for safer jobs in La Crosse and across Wisconsin and the nation.

The event was part of Workers Memorial Day, held annually on April 28th. The group came together under the banner, “Pray for the dead and fight like hell for the living.” Hundreds of events similar to the one in La Crosse took place across the globe. This is the 29th Annual Observance of Workers Memorial Day.

Each and every day in this country an average of 13 workers die on the job as a result of workplace injuries—women and men who go to work, never to return home to their families and loved ones. In 2011, 4,600 workers lost their lives on the job and another 50,000 died from occupational diseases. That’s a total of 150 workers dying each and every day.  Here in Wisconsin, 89 workers were killed on the job in 2011.

While these figures represent marked declines from annual totals reported in decades past, nobody should feel the job is done.  National events this past month serve as grim proof that we have much to do.  A young MIT Police Officer, Sean Collier, shot and killed while protecting Boston’s public from harm became a victim of both domestic terrorism and work place violence.

And, in the same week, in the small town of West, Texas a massive explosion at a fertilizer plant led to at least 14 deaths. Among the 14, at least 11 were EMT professionals – one a Dallas firefighter. The Occupational Safety and Health Administration had not inspected the plant since 1985, when it was cited for five serious violations and fined $30. Yes, 30 whole dollars. This plant had no sprinklers or fire barriers, but had been burning wood pallets in recent months.

“All workers should be able to go to work and return home safely to their family and loved ones at the end of the day,” said Bill Brockmiller, President Western Wisconsin AFL-CIO.  “It seems like every year we gather to commemorate more workers who have died from completely preventable injuries and illnesses. There is still so much work to be done.”

“Too many politicians are unwilling to support straightforward measures that protect workers, such as the OSHA silica rule, which continues to languish,” Brockmiller added.  “It’s a disgrace and dishonor to the millions who have lost their lives on the job or suffered from preventable work-related injuries. Americans need good, safe jobs now.”

The event took place at Green Island Park in La Crosse where workers and other mourners shared stories of loved ones who were killed on the job.