The union representing tens of thousands of striking Stop & Shop workers declared
victory Sunday after it reached a tentative agreement with management to increase
wages and preserve employee benefits that were under threat.

“The people, united, will never be defeated. Thank you to the Stop & Shop workers for
your sacrifices and all those who showed up in solidarity.”
—Rep. Ayanna Pressley

“Today is a powerful victory for the 31,000 hardworking men and women of Stop &
Shop who courageously stood up to fight for what all New Englanders 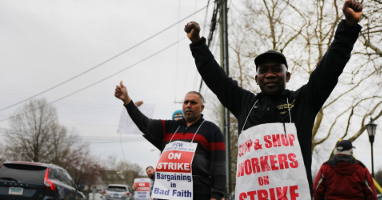 want—good jobs,
affordable healthcare, a better wage, and to be treated right by the company they
made a success,” the United Food and Commercial Workers (UFCW) said in a statement.

The deal brings to an end the largest private-sector strike in years, which lasted 11 days
and spanned three New England states. The walk-out began as a protest against Stop &
Shop’s effort to slash benefits and increase employees’ healthcare costs.

Union members—who are expected to return to work Monday—will soon vote on
whether to approve the three-year agreement, which reportedly raises wages,
preserves retirement and healthcare benefits, and upholds time-and-a-half pay on
Sundays.