from the AFL-CIO Blog

President George H.W. Bush was recently laid to rest at a state funeral with full honors befitting a former President of the United States. Remembrances were received from across the political spectrum, but one thing that all can agree on is that Bush lived a life that was devoted to public service, not only for himself, but for those who answered his call for all of us to help our fellow Americans.

George Herbert Walker Bush was born in 1924 in Milton, Massachusetts. As a high-school senior when the attack on Pearl Harbor happened, Bush was inspired to join the U.S. Navy after graduation and he became the youngest U.S. Navy pilot in the country. During the war, he flew 58 combat missions in the Pacific theater, earned the rank of lieutenant and received three Air Medals and the Distinguished Flying Cross for his service.

After returning home, he finished his Bachelor of Arts at Yale before moving into the oil industry. By the time the 1960s had arrived, Bush entered politics; and in 1962, he was named chair of the Texas Republican Party. After several failed attempts to win a U.S. Senate seat, Bush was elected to the U.S. House of Representatives in 1966. After a successful re-election campaign, President Richard Nixon asked him to run for the U.S. Senate, but the bid was unsuccessful. Nixon appointed Bush as ambassador to the United Nations. Once Gerald Ford became president, Bush was named envoy to China before returning to the United States to be the director of central intelligence. In 1980, he ran for president and lost, but was chosen as vice president by Ronald Reagan and served two terms in that role before successfully winning the presidency in 1988.

While in the White House, he worked with the Mine Workers (UMWA) and then-UMWA President Richard Trumka to sign the Coal Act, which guaranteed health care to more than 120,000 retired miners. He also signed the landmark Americans with Disabilities Act.

From the end of his one term as president through his death at 94, he turned his focus toward inspiring others to pursue public service through his Points of Light Foundation. He also worked with former President Bill Clinton to raise funds in the wake of natural disasters such as the 2004 southeast Asian tsunami.

While we (AFL-CIO) didn’t agree with all of his policy positions, we would like to thank President Bush for his lifelong commitment to public service and for inspiring that devotion in many other Americans. 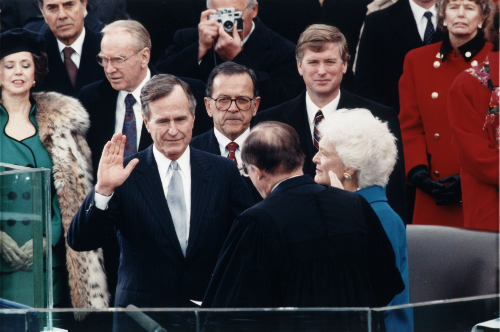