The effort to lower wages in America is going to reach new heights in Wisconsin this week.  Wall Street billionaires and political extremists are joining together to force a vote on Right to Work legislation which is wrong for Wisconsin hardworking families.  This is a blatant attempt to silence workers’ voices to stop us from speaking out about lower wages and mistreatment at work.

In America, we have a strong tradition of having each other’s backs.  Right now, workers from throughout Wisconsin and across the country are gathering in Wisconsin to fight back, together. They are using the tool Governor Walker is most afraid of: their collective voice.

This Right to Work sham is about much more than unions.  It is simply the next step in the billionaire right wing’s attempt to strip our freedoms to bargain with our employers as we see fit, ensure safe work places, and raise wages across the country.  Billionaires like the Koch brothers and the Walton family are engaged in a systematic attempt to dismantle our economy by lowering wages, while lining their pockets with record profits.

Unions and collective action are a powerful line of defense against this aggressive attack on our working families.  We need to use this fight to help all workers – union and non-union – unite in their collective voice and in their demand to raise wages throughout our country. 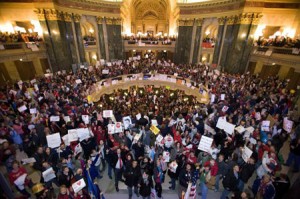