Before trying to answer this question, we need to be clear that NAFTA hasn’t been kind to Mexican workers, either. Mexican workers haven’t gained from the suffering of American workers.

In both countries, workers’ wages have been basically flat since NAFTA went into effect in 1994. Mexico had the additional tragedy that nearly 5 million subsistence farmers and their families were displaced in the 1990’s and early 2000’s when U.S. agribusiness dumped price-subsidized corn into Mexico at prices below the cost of production for Mexican farmers. That is what drove some 8 million Mexicans into the U.S. in those years.

Back to our basic question: if increased international trade improves wages and working conditions, as we are told, why have American workers seen no improvements? Is it because other countries have taken advantage of naïve U.S. trade negotiators, as President Trump argues?

No.
The basic reason is because while free trade agreements may be negotiated between countries, it is fundamentally the multinational corporations that write them. 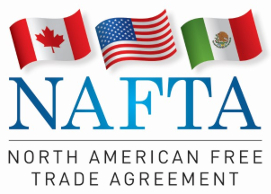 Expanded trade is not an end in itself and expanded trade does not automatically benefit workers in any country.

Who benefits from increased trade depends on what the rules of trade are—and when multinational corporations are calling the shots, you can be certain that they will come off like bandits and workers in all participating countries will be the victims.

That is exactly what has happened with NAFTA (and other so-called “Free Trade” agreements that came after it).
Starting in the 1980’s (or perhaps before), multinational corporations realized that they could use international trade treaties to promote their own interests and increase their profits. How did they do this?

Simply by promoting “free trade” agreements and ultimately getting them passed by the legislatures of key countries, they were able to reduce tariffs on most all goods (manufactured and agricultural) and thus put workers in high wage and low wage countries into competition with each other. They counted on workers blaming each other for their degraded economic conditions, not the true culprits—the multinational corporations. And they were right to a depressing degree. And if workers didn’t blame each other across national boundaries, they blamed other countries—who were equally controlled by the multinationals.

So while American workers tended to blame Mexico (and Mexican workers) and Japan (and Japanese workers) for their wage and job declines, it was really the multinationals behind the scene who were to blame—and laughing all the way to the bank with their bloated profits.

Problem: while the language of these side agreements sounded nice, there were no enforcement provisions included!

Subsequent U.S. free trade deals weren’t much better. Some, like the Korea-U.S. Free Trade Agreement, included better standards, but they were still inadequate and not fully enforceable, like the commercial elements of the deal were. (The Trans Pacific Partnership was especially lacking in this regard.)

Labor groups have figured out that if we can get the International Labor Organization (ILO) Convention standards written into these free trade agreements—and include provisions that will promote enforcement the same as the commercial provisions—we could actually use these agreements to improve the wages and working conditions for working people in all signatory countries and also expand the reach of effective environmental standards. (The ILO Conventions protect the right to organize and bargain without company interference.) The basic issue here is to begin to equalize the costs of production in all countries that are part of these deals. Then we will end the race to the bottom on wages and environmental costs. But so far, no luck.

Multinationals have resisted our initiatives because they realize that their profits and ability to exploit workers and the environment could be significantly limited if enforceable standards were included.

Without going into detail, the multinationals have figured out other ways to use free trade agreements to enrich their coffers. They have used their influence to expand the protections for “intellectual property”—i.e., patents. Especially on drugs. The TPP would have extended the period of time pharmaceutical companies could keep their brand name patents—and thus charge more before generics were permitted. The U.S. may also have included similar provisions in the renegotiated NAFTA agreement.

And finally, and most outrageously, perhaps, the multinationals figured out an incredible scheme to set up private courts to hear their charges that new laws or regulations in foreign countries violated the free trade agreement—or even “limited their future profits”! So any new labor or environmental law or regulation, national or local, that met these conditions could be challenged in court. But not the courts of the country which passed the new laws or regulations, rather the charge would be heard by a panel of international trade lawyers (usually corporate ones) appointed by the World Court. In other words, they set up their own private court system to undermine any advances in labor or environmental standards!

So next time you hear any politician (including our President) blame other countries, “foreign workers”, or sell-out U.S. negotiators for the devastating terms of our “free trade” agreements, just remember—it’s not them, it’s the multinational corporations that are pulling the strings. They are the enemy.