In a historic win in December, baristas in Buffalo voted to make their Starbucks the first of more than 9,000 corporate-operated Starbucks in the US to unionize. Since then, 143 other Starbucks have unionized and workers at 120 other locations have petitioned for union elections.

In another historic victory, a vote count on 1 April showed that workers at an 8,300-employee Amazon warehouse in Staten Island, New York, had voted to make theirs the first unionized Amazon facility in the country. Since then, however, no other Amazon warehouse has even petitioned for a union election (although workers at a 1,500-employee Amazon facility in Staten Island later voted to reject unionization).

So why has the Starbucks union drive taken off like a rocket while the Amazon campaign is only inching along?

Isaiah Thomas, a pro-union worker at the Amazon warehouse in Bessemer, Alabama, sees many reasons for the different pace – and said the biggest was the different size of the workplace. “There might be only 28 workers at a Starbucks, but 6,000 at our Amazon warehouse. In terms of what the organizing committee has to do at Starbucks, it’s not a lot of people. They can keep a close-knit friendship. They can coordinate things closely.”

Thomas said it was far harder to maintain close coordination at a 6,000-employee warehouse: “You have to have an active campaign constantly.” The Bessemer workers voted in March on whether to join the Retail, Wholesale and Department Store Union, and although the vote count showed the union trailing, there are enough challenged ballots yet to be counted that it might still win.

“Another thing that makes it harder at Amazon is that the turnover rate is ridiculous, 150%,” Thomas said. That rapid coming-and-going of employees makes it harder to get the 30% of workers to sign cards needed to request a union election, and once an election is scheduled, harder to explain to all the workers why they should vote in favor.

Colin Cochran, a Starbucks barista in Buffalo, agrees that the size of the workplace plays a big role. “Starbucks stores are way smaller than Amazon warehouses,” he said. “When the Amazon Labor Union won at Staten Island, they organized more people in one fell swoop than we have yet to organize [at Starbucks]. It’s a completely different beast.”

As a union activist, Cochran helps advise Starbucks baristas in the Carolinas who want to unionize. “We can talk to somebody and a week and a half later, they’ve got enough cards signed and can go public,” Cochran said. 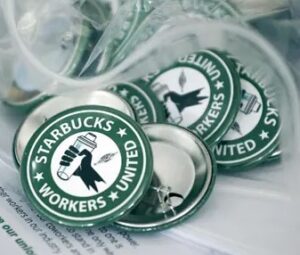 “Small units allow for a very rapid pace. I could not imagine trying to do something like that to organize an Amazon warehouse. It could take months.”

Another factor making it easier at Starbucks: it might take three to five baristas to form the nucleus of an organizing committee, while it might take 25 to 50 to form a nucleus at an Amazon warehouse. Cochran said that at this very moment, there might be many incipient union campaigns at Amazon warehouses across the country, as organizers quietly seek to get at least 30% of workers to sign pro-union cards – that would be 1,800 workers at a 6,000-employee warehouse.

Cochran said there was a little-recognized reason the Starbucks drive had been able to expand so rapidly. In the beginning, when the effort was limited to Buffalo, Starbucks flew many managers and lawyers in to work alongside baristas and help stifle the campaign. But the initial Buffalo victory quickly inspired unionization petitions in dozens of other cities, and Starbucks management and its anti-union law firm, Littler Mendelson, simply couldn’t maintain nearly as intense an anti-union effort as in Buffalo.

“We basically shattered their anti-union campaign,” Cochran said. “All of a sudden we had union drives in 100 stores.”

John Logan, a labor studies professor at San Francisco State University, sees a big similarity: “Both companies are anti-union in their DNA.” He said it might be hard to replicate the union’s success in Staten Island, considering how large the workforce is in the Amazon warehouse. In contrast, he said, “Workers United [the Starbucks’ workers’ union] has developed this dynamic, self-sustaining model that might result in this coffee chain mostly organized.”

Thus far there have been union elections at just three Amazon warehouses: two in Staten Island and one in Bessemer. That small number has enabled Amazon to do a full-court anti-union press at each one. “At Amazon, the anti-union propaganda is through the roof,” Thomas said. “You see it in the bathroom and the break room. There are mandatory anti-union meetings, and they have management one-on-ones.”

Charlotte Garden, a labor law professor at Seattle University, isn’t ready to say Amazon is more anti-union than Starbucks. “I certainly don’t think the Workers United wins are attributable to Starbucks being soft on the idea of unionization,” she said.

“These elections at Starbucks are spreading like wildfire,” she said. “It will be hard for Starbucks to put them back in the bottle.”

Logan said one important aspect of Starbucks culture had unwittingly helped the union win – Starbucks’ emphasis on teamwork and building a sense of community. (There’s little such emphasis at Amazon warehouses.) That esprit de corps among baristas often fosters strong solidarity once a union drive begins. “The workers act almost as a bloc deciding: this is what we’re going to do,” Logan said. “That helps explain why the union has won elections overwhelmingly, time after time. A lot are [almost] unanimous or 12-1, 15-1, 19-3.”

Maggie Carter, a barista at a Starbucks in Knoxville, Tennessee, that became the first Starbucks in the south to unionize, said one factor making it easier to unionize at Starbucks was that it was easier to talk freely. “We have walkie-talkies on,” she said. “We can talk about what we did last Saturday. There’s no stopping people from talking about the union.”

Thomas agreed that there was a big difference in the way staff were able to talk with co-workers, saying that many Amazon workers were “compartmentalized”. “If you’re in stowing or picking or packaging, you’re in your own cubicle, and it’s hard to talk to others,” he said. “If managers see you talking, they say you need to stop talking.”

Stuart Appelbaum, president of the Retail, Wholesale and Department Store Union, said: “Amazon and Starbucks have the same anti-union animus, but the resources that Amazon has spent have been really extraordinary. And then there’s the constant surveillance of people. In Bessemer, there were 1,100 cameras on site. The spigot never shuts off on spending money to fight unions.”

Labor experts agree that it is generally harder to unionize a factory or warehouse in the south than in the north because there is much less political and community support for unions and because fewer workers in the south have relatives or family friends who were union members and can explain first-hand the benefits of being in a union. Geography seems less relevant in Starbucks campaigns in the south, however, because Starbucks is seen as an unusual employer in the region. It is known for welcoming LGBTQ+ and progressive employees – a more left-of-center workforce that might more likely support a union.

“In the south, Starbucks presents itself as a progressive company,” Cochran said. “There often is a difference in demographic between Starbucks and other workforces.”

Garden sees a big, similar problem ahead for the Starbucks and Amazon unions. “It’s going to be extremely hard to reach a first contract” with these fiercely anti-union companies, she said. “It will require a lot of community support and a lot of job actions.”

This Story may contain copyrighted material the use of which has not always been specifically authorized by the copyright owner. We are making such material available in our efforts to advance understanding of political, human rights, economic, democracy, and social justice issues, etc. We believe this constitutes a ‘fair use’ of any such copyrighted material as provided for in section 107 of the US Copyright Law. In accordance with Title 17 U.S.C. Section 107, the material on this site is distributed without profit to those who have expressed a prior interest in receiving the included information for research and educational purposes. 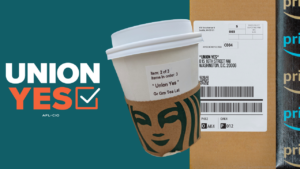